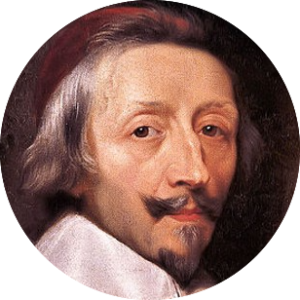 It was apparently this man – Cardinal Richelieu – who said this around 400 years ago, and it still holds good today, despite the fact that very few people conduct business with pens and swords these days.

Written content still rules, on the internet, on paper and on billboards, and most YouTubers, radio announcers and TV presenters need a script, and someone has to write that!

Words influence humans and search engine algorithms, and we have to cater to both.

Here’s the thing though – today nothing is as cut and dried today as it was back in the days of Mad Men or to be honest even at the tail end of the last millennium. I know – I was there!

Today – with the possible exception of large firms or very old fashioned ones – these are a little bit smushed together, certainly PR and marketing. The reason is that the internet has eaten everything over the past 20 years and all the old rules of what was PR and what was marketing and what was IT got upended (check out The New Rules of Marketing & PR written by David Meerman Scott back in 2010).

IT guys (and gals) started to be asked to build websites and so got roped in to marketing, and PR – who only used to send news releases to traditional media outlets – found that some blogs were way more influential in their specific niche than traditional media and that it didn’t make any sense to do it the old way any more.

And when Google Ads and Facebook came along there were also suddenly a range of inexpensive ways to get your message out in front of buyers – no more expensive ads in newspapers and magazines (even though it’s never been quite that simple), plus, if you built yourself a great website with loads of useful information on it, and Google liked it, you could find yourself on page one for whatever product or service you were providing.

It’s very easy now to put all these things in different silos and rely on one of these channels to advertise or promote. In our experience businesses are either Google Ads people, or Facebook ads people, or content/SEO people, or email marketing people. Very rarely do many businesses combine these, despite the fact that those that do often get turbocharged results!

The secret to success with ads is really three things…

The secret to success with content/SEO is…

But the real secret to marketing success is to get all these things working together (see this article on The Virtuous Circle of Content Marketing).

So where does PR fit in to all of this?

Right at the beginning. As explained in our last article, a PR approach to marketing makes you think really hard before you decide how to sell – in words – whatever you’re selling. PR gets a news release or backgrounder written, which should then be ‘stress tested’ before it’s used. Then out it goes to all those people who want to hear your news. At which point one of two things happens…

Because all of these things are interrelated – PR, Content, Ads – you need the same team at least overseeing (if not doing) all of these. Otherwise things end up in silos and – often – just don’t work  and don’t have the opportunity to work beautifully together!

PS it goes without saying that the NewsBusiness team can help you with …all of these!

Signup for all sorts of useful info on getting ads, content and PR to grow your business

You have successfully signed up to our emails.